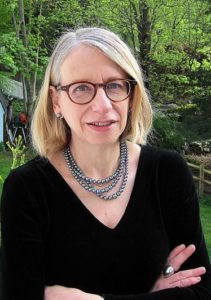 Chast grew up in the Flatbush section of Brooklyn, the only child of George Chast, a high school French and Spanish teacher, and Elizabeth, an assistant principal in an elementary school. Her Jewish parents were children during the Great Depression, and Chast has spoken about their extreme frugality. She graduated from Midwood High School in Brooklyn, and attended Kirkland College (which later merged with Hamilton College). She studied at the Rhode Island School of Design and received a BFA in painting in 1977. She also holds honorary doctorates from Pratt Institute and Dartmouth College, and is a member of the American Academy of Arts and Sciences.

Chast’s subjects often deal with domestic and family life. In a 2006 interview with comedian Steve Martin for the New Yorker Festival, Chast revealed that she enjoys drawing interior scenes, often involving lamps and accentuated wall paper, to serve as the backdrop for her comics. Her comics reflect a “conspiracy of inanimate objects”, an expression she credits to her mother.

Her first New Yorker cartoon, Little Things, was sold to the magazine in April 1978. The cartoon, which Chast describes as “peculiar and personal”, shows a small collection of “Little Things”—strangely-named, oddly-shaped small objects such as “chent”, “spak”, and “tiv”. Chast’s drawing style shuns conventional craft in her figure drawing, perspective, shading, etc.; this approach is similar to that of several other female cartoonists, notably Aline Kominsky-Crumb and Lynda Barry. A significant part of the humor in Chast’s cartoons appears in the background and the corners of the frames.

Chast has written or illustrated more than a dozen books. Her book Can’t We Talk About Something More Pleasant? is a graphic memoir, combining cartoons, text, and photographs to tell the story of an only child helping her elderly parents navigate the end of their lives.

In recognition of her work, Comics Alliance listed Chast as one of twelve women cartoonists deserving of lifetime achievement recognition. In May 2017, she received the Alumni Award for Artistic Achievement at the Rhode Island School of Design Commencement ceremony.

For more information about Roz Chast, visit the author’s website.