Joy Harjo is an American poet, musician, playwright, and author. She was born on May 9, 1951, in Tulsa, Oklahoma. At the age of 16, Harjo attended the Institute of American Indian Arts, which at the time was a BIA boarding school, in Santa Fe, New Mexico, for high school. She loved painting and found that it gave her a way to express herself.

Harjo enrolled as a pre-med student the University of New Mexico. She changed her major to art after her first year. During her last year, she switched to creative writing, as she was inspired by different Native American writers. Harjo earned her master of fine arts degree in creative writing from the University of Iowa in 1978. She also took filmmaking classes at the Anthropology Film Center in Santa Fe, New Mexico.

In 1995, Harjo received the Lifetime Achievement Award from the Native Writers’ Circle of the Americas.

In 2002, Harjo received the PEN/Beyond Margins Award for A Map to the Next World: Poetry and Tales. In 2008, she served as a founding member of the board of directors for the Native Arts and Cultures Foundation, for which she serves as a member of its National Advisory Council.

Harjo joined the faculty of the American Indian Studies Program at the University of Illinois at Urbana-Champaign in January 2013.

In 2016, Harjo was appointed to the Chair of Excellence in the Department of English at the University of Tennessee, Knoxville.

Harjo is an active member of the Muscogee Nation and writes poetry as “a voice of the Indigenous people.” In her poems, Harjo often explores her Muskogee/Creek background and spirituality in opposition to popular mainstream culture and much of her work reflects Creek values, myths, and beliefs. [source: https://en.wikipedia.org/wiki/Joy_Harjo] 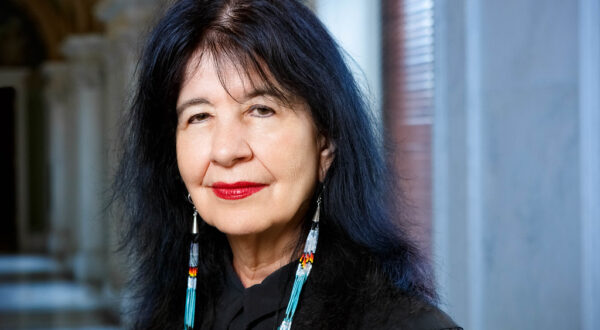 For more information about Joy Harjo, visit the author’s website.